In a situation described as similar to WWE Hall of Famer Adam "Edge" Copeland's medical disqualification from the ring, WWE star Paige (Saraya-Jade Bevis, 25 years old) was informed this week that she will not be cleared to return to the ring after her most recent in-ring injury, PWInsider.com has confirmed with multiple sources. It is believed Paige was given the news at the Raw taping this past Monday. We have been told by multiple sources she is "done" as an in-ring wrestler.

During a six woman tag team bout on 12/28/17 at the Nassau Coliseum in Uniondale, Long Island, Paige had her back to Sasha Banks, who was behind her against the turnbuckles. Banks used the ropes to pull herself up and kicked with both legs into Paige's back. Paige, obviously not ready for the bump, went down. She tried to get up but could not get her legs under her, finally did get up and turned to grab Banks, immediately falling down again and rolling over to her back, where she stayed. The referee checked on her and called for the bell. She was examined by WWE medical personnel and a stretcher was brought to ringside to transport her back to the locker room. After several minutes, Paige walked out under her own power.

It was believed at the time that Paige had suffered a stinger, leading to her losing feeling in her extremities. Given her previous neck surgery, WWE pulled her from the ring and set up further testing that led to this week's decision.

Paige had been announced for the first-ever Women's Royal Rumble match on 1/28 in Philadelphia after she was injured, but we are told that was before medical testing led to the determination that she was to be pulled from performing as an in-ring competitor. She will be replaced in the match and all signs are that she will relegated to a non-physical role for the company going forward. One would assume the company will devise a way to write her out of the Rumble match without any physicality, similar to how Daniel Bryan is not allowed to be involved in anything physical in his current role as Smackdown General Manager.

Paige's injury came, as most injuries do, at the worst possible time.

2016 into 2017 was an explosive year for Paige that saw her undergo neck surgery, be hit with a pair of WWE Wellness Policy suspensions, undergo the embarrassment of personal and explicit videos being leaked and of course, her public and tumultuous relationship with Alberto el Patron. There were a number of incidents that played out in the public eye involving the couple, included a July 2017 scene at the Orlando International Airport that was so bad, local authorities got involved, later determining not only that Paige was the aggressor in the situation but that there was enough evidence to prosecute her for domestic violence battery. In the end, the District Attorney's office opted not to move forward with the prosecution.

By the latter part of the year, however, Paige was cleared medically and was finally back in the ring, spending time at the WWE Performance Center in order to prepare for a television return. She was brought back with great fanfare during a great Raw segment last year, helping to introduce NXT talents Mandy Rose and Sonya Deville to the main roster as part of the Absolution faction. The strategy behind putting the group together may have been to devise a way to limit Paige's ring time due to her previous neck issues, while also getting her back on TV in a prominent role. Almost immediately, the trio was clicking, feuding with Sasha Banks, Bayley and Mickie James. Paige was right back where she should have been.

Then, the injury happened.

The irony of the situation, a number of sources have pointed out, is that no one would think there was anything physically wrong by looking at Paige, making it even more unthinkable that she, at 25, is being removed from WWE competition.

A second generation star from Norwich, England who broke into the business at just 13 years of age, Paige's signing to WWE developmental was instrumental in leading to the current incarnation of the WWE women's division. She was one of the first breakout stars of the WWE NXT brand as it evolved from just being a developmental territory. NXT's Women's division, unlike the WWE main roster at the time, specifically focused on the athletic in-ring abilities of the female talents and built stories, title matches and rivalries no different than NXT's male counterparts.

As more and more talents migrated from NXT to arrive on WWE's main roster, the women's division there also evolved, becoming far more performance-based as the division became a more popular and important piece of WWE's product, Paige was not only a major part of moving the division forward, she was the first sign of that the tides were changing.

While Paige will not be allowed to wrestle going forward by the company, we are told that she is extremely well liked by management, so one would think she would remain with the company in some capacity. She was featured on reality series Total Divas, so that's a possible vehicle for her, as are WWE Studios feature films. It's also possible the company could tap her to Coach in the NXT system or attempt to transition her into another on camera role.

Of course, The Rock is producing WWE Studios' forthcoming film "Fighting With My Family", which will be released theatrically September 14th. The company will obviously utilize Paige to promote the film, which based on a British documentary made about Paige's family, The Knights, who have been wrestling and promoting the World Association of Wrestling (WAW) promotion in Great Britain for years. One of the lead characters, named Raya (short for Saraya, Paige's given name) is played by actress Florence Pugh and is the central character of the film as it follows a fictionalized version of Paige's path to World Wrestling Entertainment, right down to a major scene where they recreate the night she debuted on Raw and captured the Divas championship.

The importance of her connection to the film alone should allow Paige to continue to be showcased in some fashion until the film hits theaters.

Outside of WWE, Paige had been attempting to build a separate brand for herself under the name "Saraya" with the assistance of former WWE star Rosa Mendes and her husband. Obviously, that will continue as well. AND YOU CAN'T TEACH THAT 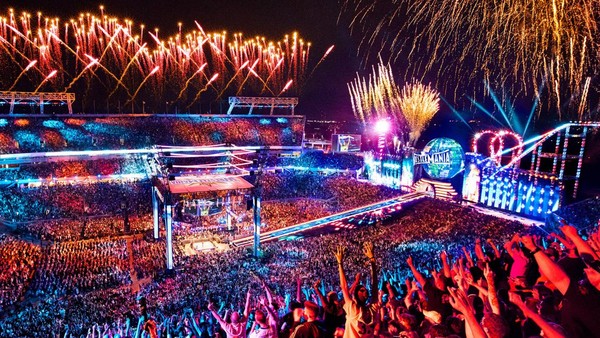 Io Shirai, who was considered the biggest women's wrestling star in Japan, looks to be headed to WWE.

Tokyo Sports reported in its Monday newspaper that Shirai would be going to WWE and her final show with Stardom would be June 17th. Sources close to her have confirmed the story.

She was first contacted by WWE in October 2016. She and Kairi Hojo (now Kairi Sane) both went back-and-forth on deals since the WWE contracts were for less money than they were making, but they were convinced the upside of becoming stars outside of Japan were enticing. She finally accepted the deal last May, however a heart issue was discovered in WWE medical examining and WWE rescinded the offer last June, and she returned to Stardom. She underwent a full medical examination in Japan and was fully cleared and has been the top star in the company since.

She lost her Wonder of Stardom title to Momo Watanabe on Wednesday night, which started rumors of her being WWE-bound. However, in that case, one had nothing to do with the other as the booking plan was for Watanabe, who they hope to be a future top star, needed the win at this time. The promotion wasn't aware of Shirai leaving until today.

Besides Shirai and Toni Storm, who also signed a U.K. contract with WWE, the company has made offers to other Stardom wrestlers and with the Mae Young Classic this summer, the Stardom Five-Star tournament has lost several wrestlers who were originally to be part of it.